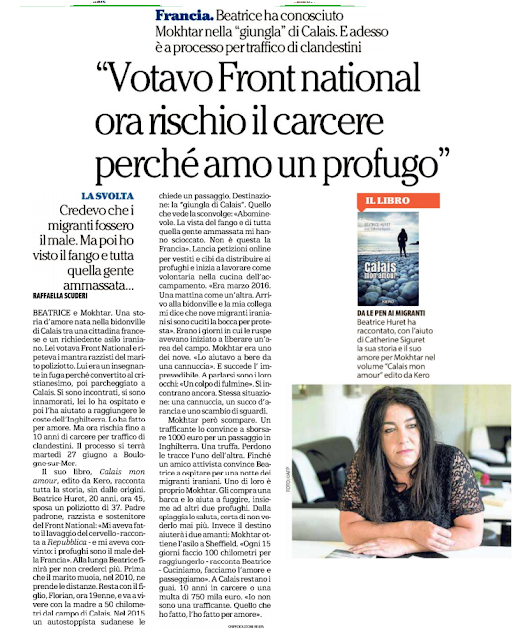 These are external links and will open in a new window

Béatrice Huret stood on a beach on the northern French coast before dawn, watching as her lover headed off across the English Channel in a rickety boat. Would she ever see him again? Had she been taken for a ride, used by a man she met just a few weeks earlier to help him fulfil his dream of a new life in England? Would he drown on the way?
As the boat disappeared over the dark horizon, Béatrice returned to her car, her head full of hope but also full of doubt.
The 45-year-old had just a couple years previously been a card-carrying member of the far-right National Front (FN), and she was the widow of a policeman who she says was racist.
Now here she was helping her migrant lover, Mokhtar, whom she had met in the so-called Jungle migrant camp in Calais, to sneak into Britain.
She recounts the story of how her life changed the day she offered a lift to a teenage migrant in a new book titled Calais Mon Amour.
Béatrice says that before his death from cancer in 2010 her husband had been one of the huge number of police officers deployed in Calais to keep migrants from breaking into the Channel Tunnel terminal or the ferry port, in their bid to get to the UK.
As a policeman he was not legally allowed to join a political party, so he got his wife to sign up instead to Marine Le Pen's FN, which paid her to distribute pamphlets.

She says that, unlike her husband, she was not really racist. But she admits she was worried about "all these foreigners, who seemed so different, and who were getting into France".
Béatrice lived with her teenage son and her mother about 20km (12 miles) from the Jungle, but she had never seen the giant shantytown built of tents and shacks on waste ground on the outskirts of Calais.
On her way home from work one very cold day in 2015, she took pity on a Sudanese boy and agreed to drop him off at the camp, which at its peak last year was home to 10,000 people, most of whom had fled war or poverty in Africa, the Middle East, or Afghanistan.
Then, for the first time, she saw for herself what conditions there were like.
"I felt as though I was in a war zone, it was like a war camp, a refugee camp, and something went 'click' and I said to myself that I just had to help," she says.
Suddenly migrants were no longer just a word, no longer an abstraction.
Béatrice, who works at a centre where young people are trained to become carers, started to bring food and clothing to people in the Jungle, roping in friends and family members to help. Slowly she got to know the camp and its people, ranging "from shepherds to lawyers to surgeons".
Then, in February last year, she laid eyes on Mokhtar, a 34-year-old former teacher who had had to flee his native Iran, where he faced persecution, and was ostracised by his own family for having converted to Christianity.
She met him just at the moment when photos of him, and of several of his compatriots, were being published in newspapers around the world, because they had sewn their lips together in protest at the appalling living conditions in the Jungle.
"I sat down and then he came over and very gently he asked me if I would like a cup of tea, and then he went and made me tea, and it was a bit of a shock. It was love at first sight," she says.
"It was just his look, it was so soft. There they were with their lips sewn up and they ask me, do I want some tea?"
But communication was an obstacle, as Mokhtar spoke no French and she, unlike him, had little English. Their solution was to use Google Translate.
A romance blossomed and Béatrice offered to put up Mokhtar and some of his friends in her house, ignoring advice from her friends that she was making a big mistake.
She was under no illusions about her new lover's goal. Mokhtar had already tried to get to England by hiding in the back of lorries and now he was about to try a change of tack. He and two friends gave Béatrice about 1,000 euros (£980; $1,130) and got her to buy a small boat for them.

On 11 June last year, Béatrice towed it to a beach near Dunkirk, and the trio of migrants, none of whom had been in charge of a boat before, set off at about 04:00 on a perilous journey across the world's busiest shipping channel.
"We dressed them up so they would look like men out on a fishing trip, with fishing rods," she says with a smile.
That was the moment when the whole thing might have ended, when Béatrice hoped for the best but worried that she might have been had, and worried that Mokhtar and his friends might even drown.
That very nearly came to pass, when the boat started taking water around 06:30, as it approached the English coast.
It was terrifying, but with hindsight there was something comic about it.
"The youngest was vomiting from fear, the toughest one was smoking cigarettes and saying 'Well, if you have to die, you have to die, that's life,' and there was Mokhtar scooping out the water and phoning the emergency services at the same time," she says.
The British coastguard sent out a helicopter which eventually spotted them and sent a boat out to the rescue.
The three migrants were later questioned by immigration officers, and after a couple of days Mokhtar was sent to an asylum centre from where he could finally contact his beloved, who had been waiting anxiously on the other side of the Channel.
"He gave his address in Wakefield. I went to see him the next weekend," Béatrice says.
And ever since then she has taken a ferry every second week and driven up to see her lover, who is now in a refugee hostel in Sheffield and who has successfully applied for asylum in the UK. They keep in touch via webcam nearly every night.
So what of the future? The couple have no plans, Béatrice says, noting that "it hurts when you make plans that don't work out".
"If our relationship ends, then so be it [but] I owe Mokhtar a beautiful love story, the most beautiful one of my life."

Syrian migrant: 'I nearly drowned in chocolate'
Twenty-four hours in a fuel tank
The special shoes
The story for her does not end on a purely happy note. Last August she was arrested and charged with people smuggling. She laughs when she speaks of the charge, as for her the idea that she was in it for the money is nothing short of ridiculous.
She was taken into custody at the same police station where her late husband used to work. Released on bail, she was placed under judicial supervision, and has to report to police once a week, as she waits for her trial to begin later this month.
If found guilty, she could in theory be sentenced to 10 years in prison and fined 750,000 euros, though in her case the penalty would probably be less severe.
Béatrice has also been put on the government watchlist of people who are deemed a potential threat to the security of the state. Most people on this list are radical Islamists. This too makes her laugh.
Was it all worth it?
"Yes," she replied without hesitation. "I did it for him. You do anything for love."
Béatrice Huret's book, Calais Mon Amour, is ghost-written by Catherine Siguret
Join the conversation - find us on Facebook, Instagram, Snapchat and Twitter.
Pubblicato da Redbeppeulisse a 20:11 Nessun commento: Link a questo post